The Growing Severity of Hail

Hail is one of the costliest types of weather in the United States, inflicting as much as several billion dollars in damage annually. This article discusses the physical processes that generate hail, the impacts on loss of life and property damage, as well as the science behind the changing severity of hail. 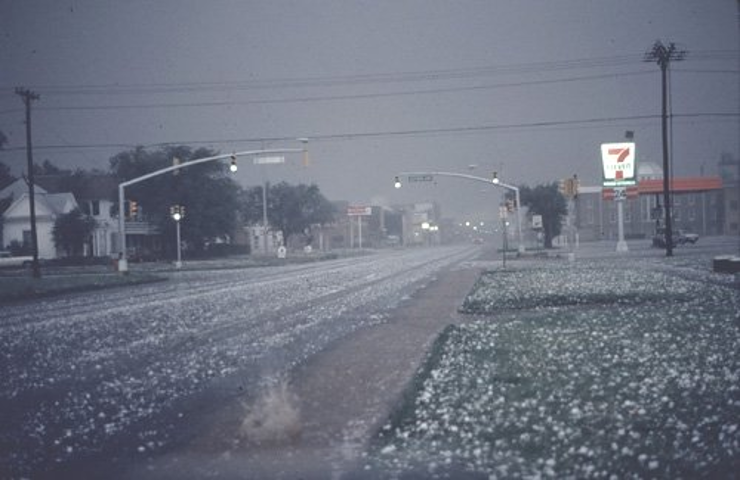 Hail is one of the costliest types of weather in the United States, inflicting as much as several billion dollars in damage annually. This article discusses the physical processes that generate hail, the impacts on loss of life and property damage, as well as the science behind the changing severity of hail.

So, what exactly is hail? Hail is larger pieces of ice that fall from convective thunderstorms. Strong updrafts in thunderstorms keep them aloft in the storm clouds where they can grow until they are too heavy for the updraft to support and fall to the ground, where larger hailstones often damage property and plant life. Thunderstorms that produce these hailstones occur primarily in spring and summer months in areas where shear, lift, moisture, and instability can spawn stronger thunderstorms.

People often confuse hail with sleet, which forms in cold weather when winter storms bring a “wintry mix” of precipitation, including snow and ice. In winter storms, when a layer of relatively warm air overrides colder air at the surface, a falling raindrop will often freeze into an ice pellet before it hits the ground. These “bouncing ice pellets” are dangerous because they can produce icy roads and walkways - but they are not hail!

As previously mentioned, hail is always associated with thunderstorms, and the most common time to see it is in the spring and summer. Although hail can also fall as small ice pellets, higher-impact hail can become as large as golf balls, baseballs or softballs. Sleet never grows beyond the size of small pellets.

GeoTrek interviewed Eleanor Kitzman, an insurance executive and former insurance commissioner in South Carolina and Texas, last fall for a podcast episode. In this podcast, she discussed a wide range of weather-related impacts on buildings, including hail damage.  The podcast also discussed building back after these disasters and how to make your property more resilient to future damages. I had a follow-up interview with Eleanor Kitzman at the end of March to ask additional questions after listening to the podcast interview between Eleanor and Dr. Hal Needham.

According to Kitzman, roofs, skylights, cars, and boats suffer the most hail damage each year, but siding and windows on upwind sides of homes also can see damage if hail becomes wind driven. An article written about repetitive hail damage near Norman, Oklahoma shares how a location could suffer from multiple large hail events within one year. Some interviewed residents reporting shattered windows and damaged or missing siding after a severe thunderstorm dropped baseball-size hail in the area.

In April 2021, an unexpected storm with golf ball sized hail impacted my area in College Station, Texas, and while my car’s windshields and windows remained intact, the car was labeled as “totaled” by insurance due to the number of dents in the metal exterior of the vehicle. Kitzman explained that this is common, as the cost to repair such dents is worth more than the car’s value. Parking your vehicle in a garage or under a car port can substantially reduce the risk of hail damage.

The year of 2021 was a major year for hail, with the state of Texas setting a record for hailstone size in Hondo (a town due west of San Antonio by about 50 miles) at over 6 inches in diameter. This storm in Hondo unfortunately occurred on the same evening of the Norman hailstorm, April 28th, making that day a major one in terms of hail statistics.

In terms of home protection, there is a new type of roof shingle, discussed in both the podcast and in my interview with Eleanor Kitzman. This type of shingle is made from recycled rubber tires and can protect roofing against damage from hail up to 2 inches in diameter (or roughly the size of a lemon). Unfortunately, this shingle is expensive and won’t protect your roof from the most significant hail damage that occurs with hail larger than 2 inches in diameter.

Hail shape also impacts damage as well. Typically, hailstones are mostly spherical in shape, but other hail stones can be oblong in shape or have a spiked appearance depending on formation and melting that may occur as the hailstone falls out of the colder regions of the cloud. This, according to Kitzman, can impact damage. For instance, glass may be more likely to break if hit by the end of a more pointed or spiked hailstone.

Hail is rather difficult to forecast from a meteorological standpoint, according to an article by Eos, mainly because its effects occur in small time and spatial scales. As a result, hail data are relatively hard to come by, and usually rely on reports from people impacted by the storm on its path.

The Storm Prediction Center (SPC) under the National Oceanic and Atmospheric Administration (NOAA) issues general forecasts each day (at SPC.noaa.gov) showing where severe thunderstorms (including hail) could occur. Risk levels and chances for severe threats like tornadoes, hail, and damaging winds differ based on atmospheric conditions.

For timing of hail and where exactly the thunderstorms producing them show up, forecasters are more uncertain, as Eos highlights in their article. There are high resolution models that can get a general idea of where storm cells can form and develop, but no model has ever been perfect for this kind of event. The hailstorm I experienced last April, for instance, was largely unexpected, as no rain or thunderstorms were forecasted for my area.

Hail is produced in narrow swaths as a storm (or storms) move through an area, so damage isn’t widespread unless a hail core moves over a larger population center. When this does happen, like last year, we ended up with what will likely be one of the costliest years in US history in terms of hail damages. The actual weather-related damage totals for the year 2021 haven’t been posted yet, but they will likely be available at the end of 2022.

Historically, hail occurs most often in midwestern and southern states with a bullseye in Texas, Oklahoma, and the eastern half of Colorado where severe hail (greater than 1 inch) occurs most frequently. However, hail can happen in most states, which emphasizes the need for preparation. Eleanor Kitzman, in my interview with her, suggested that homeowners have contractors seal the roof deck to avoid water leakage in case of a damaged roof. While hail or other weather issues may damage the roof, a sealed roof deck will prevent water from leaking through the roof deck, into the 2x4 boards, the drywall, or even the home’s interior. Water damage to homes is often also very costly and could end up being more costly than the roof damage itself.

Although hail historically does not inflict many fatalities in the United States, it often causes more property damage than thunderstorm wind and lightning, which are both more fatal hazards than hail. Hail also results in the largest crop damages and second most property damages (behind tornadoes) of the convective thunderstorm weather events listed in the table to the right.

Unfortunately, as our climate warms due to natural and manmade changes, this could impact hailstones in negative ways. According to a Nature article, hailstones are expected to be larger due to more instability and moisture as the world warms. This will increase severe thunderstorm potential. But higher melting levels in a warmer world will melt off smaller hailstones and make them less common. The same Nature article also states that hail frequency is expected to increase in Australia and Europe but decrease in North America and eastern Asia. However, hail severity will increase globally. In general, hail may happen less frequently, but will be more intense when it does occur.

An article by The Atlantic concluded that hail is becoming more widespread and intense within the United States and especially in “hail alley” in the central regions of the country. The article mentions that several car dealerships in midwestern states lost insurance coverage from Zurich North America in 2018 due to catastrophic hail damage, as the insurance company found the damage to be too costly to continue to insure.

To mitigate against hail damage, some car dealerships in the South-Central United States have installed roofing to protect vehicles from hail damage. The photo below was taken at such a car dealership in McKinney, Texas, in April 2022, as a severe thunderstorm with hail and a tornado approached it from the west.